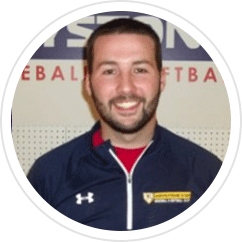 Coach Vernesoni has been the Director of the Keystone State Bombers for the past eight years, heading up the 17u National Team and establishing what is now well known as the Bombers flagship program. Shaun finished his college playing days in 2012 at Fairmont State University where he led catchers in all divisions of NCAA baseball in throwing efficiency for that season. He had 35 assists on the season and threw out an impressive 21-of-32 runners trying to steal. He acted as the Team Captain at Fairmont State in each of his last two years and was named Team MVP following the 2012 season. Vernesoni also played at one of the premier junior colleges in the country (Calhoun Community College – Decatur, AL) as well as at West Virginia State University where he was a part of the 2009 WVIAC Championship team. Vernesoni is now co-owner of Keystone State Sports Facility, one of the top private baseball instructors in the area, and an Associate Scout with the San Diego Padres.