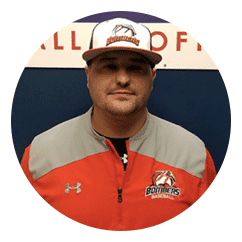 Joe Hruska played his high school career at Linesville High School where he was an integral part of the 1999 State Runner up team which finished the season an impressive 26-1. From there, he went on to become a four year starter at second base for DII Davis and Elkins College in West Virginia. During his college career he was chosen to play on a team representing the USA in the Flanders International Tournament in Belgium where he was offered a contract as a Player/Coach for the Brasschaat Braves.

After graduating he stayed on at Davis and Elkins as an assistant coach with a focus on infield play and hitting. That year Davis and Elkins broke school records for fielding percentage and wins in a single season, as well as producing its only MLB draft pick. Hruska coached High School and American Legion Baseball in West Virginia and Northwest PA for over a decade before moving to Eastern Pennsylvania. Joe now shares his knowledge as a private instructor at the Keystone State Sports Facility where he is co-owner, and he is also currently an Associate Scout with the Philadelphia Phillies.